Worldwide about 1 in 90 human births (1.1%) results from a twin pregnancy, but it isn’t as simple as that as there are different ways that twins are formed in the womb.

Fraternal twins occur when two separate eggs are fertilised by two different sperm causing two zygotes which is where the term dizygotic comes from (di=two, zygotic=zygotes). The two zygotes are the first cells that will go on to create your two babies, who have their own sets of DNA. They can be any combination of girl-girl, boy-boy or girl-boy. Fraternal twins will always have their own placentas, amniotic sacs and chorions; however, occasionally the placentas can fuse during pregnancy and appear to be one.

Fraternal twins are more common if the twins’ mother:

As fraternal twins are caused by the release and fertilisation of two eggs, it is the female that determines whether twins are a possibility. The gene that causes hyper-ovulation can be passed down the family line producing a set of twins occasionally. 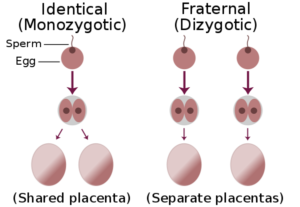 Identical, or monochorionic, twins occur in 25% of twin pregnancies. Research indicates that identical twins have a very similar genetic makeup (sharing about 88% of their DNA), resulting in both children looking alike. Identical twins are the same gender, ear shapes, eye colour, hair colour and teeth imprints. They will often develop at similar rates and experience developmental stages simultaneously, for example when they learn to walk and grow their first teeth. They may also have similar brain wave patterns.

What causes a fertilised egg to divide and create identical twins is still unknown.

Identical twins are categorised by chorionicity—depending on when the fertilised egg splits and how it splits, such as top/bottom or right side/left side. After an egg is fertilised it will develop a yolk sac (important for nourishing the forming embryo) and around the same time, the embryo’s placenta and chorionic sac begin to form. Finally, an amniotic sac surrounds the developing baby. There are different types of chorionicity for identical twins, depending on how many days following fertilisation that the zygote splits.

If the egg splits before the placenta has formed, within three days of fertilisation, each baby will have their own placenta, chorionic sac and amniotic sac. These twins are known as ‘DCDA’ or ‘Di-Di’ twins or Dichorionic/Diamniotic meaning two chorions and two amniotic sacs. All fraternal and around 25% of identical twins will be ‘Di-Di’ twins.

If the egg splits after the placenta has formed, after the third day following fertilisation, then the babies will share a placenta and chorionic sac, but will have their own amniotic sac. These twins will be known as ‘MCDA’ or ‘Mo-Di’ twins or Monochorionic/Diamniotic twins. Around 60-70% of all identical twin pregnancies will result in a ‘Mo-Di’ combination.

The greatest risk with this pregnancy is Twin-to-Twin Transfusion Syndrome (TTTS) as both babies are sharing the same placenta or blood supply.

Zygotes that split at this late stage account for around 1-2% of identical twin pregnancies. Monoamniotic twins occur when the egg splits after the amniotic sac has begun to form, around nine days after conception. As a result, both babies share an amniotic sac. Many monoamniotic twins lie very close to, or on top of, each other and early ultrasounds cannot tell if they are separate babies. These babies have the highest risk of complications during pregnancy such as Twin-to-Twin Transfusion Syndrome (TTTS) and they are also at risk of getting tangled in their umbilical cords. They are known as Monochorionic/Monoamniotic or ‘MCMA’ or Mo-Mo’ twins.

Zygote splits after 12 days from fertilisation

In very rare cases where the zygote doesn’t split until after 12 days then the result is usually conjoined twins where body parts and often organs are shared between the babies. 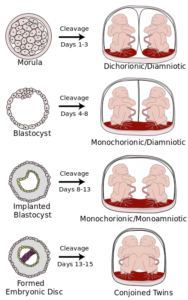 Other types of twinning

In 2007, scientists discovered a pair of semi-identical boy-girl twins that had the same genes from their mother, but different genes from their father. There are two theories as to how this occurred: either the egg divided and was then fertilised by two sperm, or the egg was fertilised by two different sperm and then divided. There is only one known case of semi-identical twinning!

Polar body twinning is very unusual and extremely rare. The process is quite complicated and occurs even before the egg cell is developed. As part of the creation process of the egg, four cells are created – the egg cell which will go on to be fertilised plus three other cells called polar bodies. These three polar body cells usually degenerate and die away once the egg is created; however, occasionally one of the polar body cells manages to survive and become fertilised. The polar body and the egg share identical genes from the mother, but they may then be fertilised by two separate sperm from the father. This will result in twins who share half their genes in common (from the mother) and the other half different (from the two sperm).

Mirror image twins can result when a fertilised egg splits later in the embryonic stage, around day 9-12 and can only occur in identical twins.

The term mirror twins refers to the fact that they have the same physical features, but opposite asymmetric features. For example, one twin could be left-handed, the other right-handed. One twin has a birthmark on their left foot, the other on their right. In extreme cases, twins can even have mirrored internal organs.

Another form of twinning that has been identified is called chimerism. This is thought to occur if two sperms fertilise two separate eggs which then fuse, producing individuals with different sets of chromosomes. This can cause each twin to have two different blood types each and in some cases have both female and male chromosomes. Chimerism has also been associated with fused placentas.

Did you know, it is possible for twins to have different fathers? One well-known case dates back to 1810 where a woman had both a white and a black lover. She became pregnant and gave birth to twins, one white and the other black. Each twin had a different father.

This type of twinning is called superfecundation and occurs when the mother ovulates more than one egg and has more than one partner during her fertile period. One egg is fertilised with sperm from one partner and the other egg from the sperm of the second partner. These types of twins are always fraternal.

Superfetation occurs when a woman ovulates more than one egg but the eggs are released and fertilised at different times, sometimes up to 24 days apart. The resulting twin pregnancy has two different conception dates, so the babies may be quite different in size and days or weeks may separate the births. There are only a handful of confirmed cases of superfetation twinning.